When Die Antwoord played in New York a couple of weeks ago, Neville Ross was trying to get them to pay a visit to the coffee shop that he has opened with Nick Carnavale. Nothing would be cooler than to have a South African group that everyone’s talking about hanging out in a half-South African’s coffee shop that people are talking about. Die Antwoord didn’t come, in the end, but Gasoline Alley doesn’t really need the publicity. It’s cool and hip already, right at the crossroads of NoHo and SoHo. 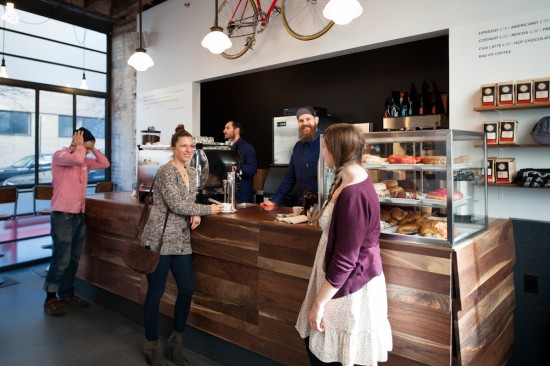 Carnavale and Ross On Duty The location has an extra meaning for Ross, whose family has had a tire and car repair business in Cape Town and George since 1946. The coffee shop is situated on a part of Lafayette Street that used to be known as Gasoline Alley because it was crowded with car-service shops.

“I missed having a small business,” says Ross, wearing one of the bike caps the shop now sells with Intelligentsia coffee beans, “and wanted to open something that I was passionate about.”

That ‘passion’ would, of course, be coffee. Together with Carnavale, a British expat, they waited for the perfect site for their business. Both owners are into cycling, and a racing bike has pride of place hanging from the ceiling above the till. The market they have entered is a tough one – with well-known new-wave coffee shops like Blue Spoon and Toby’s Estate also recently opening in New York – but already they are drawing the numbers. So stop by for a doubleshot.

When Die Antwoord played in New York a couple of weeks ago, Neville Ross was trying to get them to pay a visit to the coffee shop that he has opened with Nick Carnavale. … END_OF_DOCUMENT_TOKEN_TO_BE_REPLACED

I don't know about you, but if a movie is shot in South Africa I can tell. Within five seconds of a Volvo ad screening on TV, I can detect Chapman's Peak or the Karoo or a … END_OF_DOCUMENT_TOKEN_TO_BE_REPLACED

The New York Times today carried an op-ed piece by South African-born, Rhodes graduate Greg Smith decrying the state of his employer, Goldman Sachs. Titled "Why I am Leaving … END_OF_DOCUMENT_TOKEN_TO_BE_REPLACED

New York City finally got my bicycle. I knew it would happen sooner or later. The warnings were there. The last time I went to the bike shop to check on which locks were best, … END_OF_DOCUMENT_TOKEN_TO_BE_REPLACED

We all know that Cape Town is being used a lot for movie shoots and ad shoots, often doubling for a city in America or elsewhere. This week sees the launch of Safe House, an … END_OF_DOCUMENT_TOKEN_TO_BE_REPLACED