In Ted’s Ongoing Pursuit of the Great Cup of Coffee, I followed illy’s master barista, Giorgia Milos,  around New York recently (prior to my two days at illy’s University of Coffee). We took in four coffee shops of my choosing, and after we had glugged our espressos he gave his assessment of where coffee in New York (and America in general) is today. And, as you will see from the article I wrote for www.salon.com, it’s not in a very good place. The article, posted today, has already drawn a hefty number of comments from around the country. As I say, Americans take their coffee seriously! 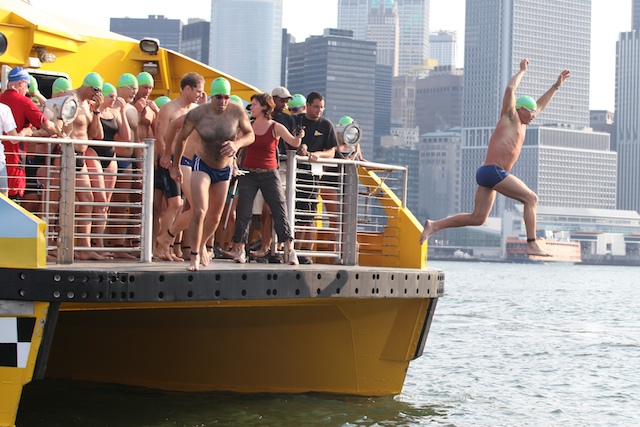 Jumping into the Hudson River

Every summer in New York City, hundreds of people dive into the Hudson River and swim. At the same time, hundreds of thousands of New Yorkers go ‘Yech!’ because they are convinced that the Hudson is dirty, filthy, disease-ridden. Swim there? Never!

I am one of those hundreds of people who swim the Hudson, and I have been doing so for more than a decade. That’s when an organization called Swim NYC first had the idea to, as they say, ‘Take Back the River’ – especially seeing the city had made such great strides cleaning it up. It launched a 2.5-mile swim starting at the 79th Street boat basin and ending at Chelsea Piers on 23rd Street. There were 35 of us who dived in, and we swam one of the rarest routes you will ever find. In between strokes I contemplated the water-level views of the Chrysler and Empire State buildings and marveled at the idea of doing freestyle right under the stern of the USS Intrepid. It was a swim one doesn’t easily forget.

Now, a decade later, NYC Swim offers almost a dozen events in the Hudson and East rivers every summer, and each of them draws about 250 people (that’s the limit – NYC Swim can’t control more than that number in the boat-heavy waters around Manhattan). One very popular route, barely a kilometer long, goes under the Brooklyn Bridge, from Lower Manhattan, near Chinatown, to Brooklyn. Another, this past Sunday, was a two-miler around Governors Island, the little-visited old fortress island across the water from Lower Manhattan. 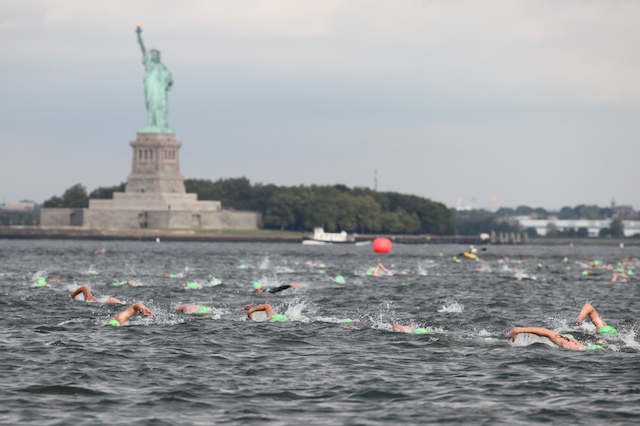 Freestyling in the Shadow of Lady Liberty

There were over 200 of us who caught the ferry across to Governors Island early that morning, changed into our swimsuits and got our electronic tags, and then were taken by water taxi to the drop-off point directly off of the 18th-century Fort Jay. From there we swam counterclockwise around the island, the Statue of Liberty to our right, the Verrazano Narrows Bridge in the distance, and then, as we turned the corner, the Brooklyn Naval Yard, Manhattan Bridge, and Manhattan. Except that being a left-hand breather, I missed out on all the tourist attractions and saw the island most of the way. For anyone who doesn’t swim, Governors Island is a great visit anyway. The ferry, right next to the Staten Island ferry, is free, although it runs on a limited schedule. There are bikes for hire on the island, and it’s a good visit for a few hours. Even if you wanted to swim, though, you couldn’t. Uncontrolled swimming in the Hudson isn’t happening, at least not yet. Right now you have to race. So come join us.

When Die Antwoord played in New York a couple of weeks ago, Neville Ross was trying to get them to pay a visit to the coffee shop that he has opened with Nick Carnavale. … END_OF_DOCUMENT_TOKEN_TO_BE_REPLACED

I don't know about you, but if a movie is shot in South Africa I can tell. Within five seconds of a Volvo ad screening on TV, I can detect Chapman's Peak or the Karoo or a … END_OF_DOCUMENT_TOKEN_TO_BE_REPLACED

The New York Times today carried an op-ed piece by South African-born, Rhodes graduate Greg Smith decrying the state of his employer, Goldman Sachs. Titled "Why I am Leaving … END_OF_DOCUMENT_TOKEN_TO_BE_REPLACED

New York City finally got my bicycle. I knew it would happen sooner or later. The warnings were there. The last time I went to the bike shop to check on which locks were best, … END_OF_DOCUMENT_TOKEN_TO_BE_REPLACED

We all know that Cape Town is being used a lot for movie shoots and ad shoots, often doubling for a city in America or elsewhere. This week sees the launch of Safe House, an … END_OF_DOCUMENT_TOKEN_TO_BE_REPLACED